March 17, 2013
Start of Semester 1 2013 has resulted in quite a boost to the number of pages since February. The increases are primarily course/unit driven (The UCPortfolio service is not advertised to students as being generally available, and most of the use is assessment and professional practice development driven). This is evidenced by the jump of ~10,000 pages since semester began, compared to the flat-line growth over the end of year/Summer/Christmas break. 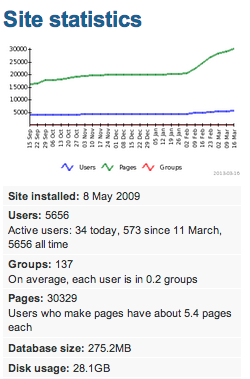 The ~10,000 increase in the number of pages is also an indicator of the increased numbers of unit/course now implementing e-Portfolio practice. The range of disciplines now includes:


This growth is significant. The system has been in use since 2009 and has never before experienced an increase of ~10,000 pages in a two month time frame.

Background: growth in Mahara usage and e-portfolio practice has been organic, in terms of Mahara use it began with individuals such as Tiina Roppola (Teacher Education) and Ben Gilbert (Pharmacy) from 20010/11. Others such as Stephen Barrass had been using other cloud based systems in media production from before 2009. Mahara is now being adopted by not only more individuals in various disciplines but also for the first time this year entire teaching teams - e.g. Teacher Education.

From here on I will post the growth stats as a graphic (see above) each month.