October 18, 2015
This year the ePortfolios Australia Forum was held at Edith Cowan University, Perth, Western Australia. A big thanks to Edith Cowan, Vanguard Visions and the community.


It was fantastic to catch up with the community after so long, I didn't attend the 2014 forum last year and really missed the enthusiasm and energy it brings to ePortfolio practice. There were the long time implementers as well as people new to ePortfolios wanting to find out what they can offer and how to go about implementation. ECU offers some fantastic learning spaces as well, with now common design trends being applied to their flexible and collaborative learning spaces. Note the fixed monitors that groups can orient around. An interesting thing we noticed was a small team doing the rounds before classes, re-configuring the rooms according to the preferences of the teacher, I assume the preferences are collected at the time of the booking. 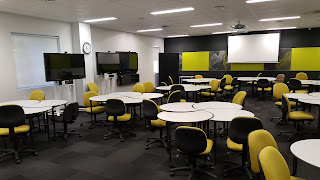 PebblePad is a leading ePortfolio application from the UK, and had a strong presence at the forum, hosting some of the workshops and presentations. I was able to learn more about this offering and compare against the system we use, Mahara. In terms of assessment the software can be run independently of an LMS as the software has built in marking and feedback functions. This is quite different from how we use Mahara, which is tightly integrated with Moodle's gradebook function. PebblePad also has functions to support and streamline competency based assessment and evidence collection and assessment, in contrast with Mahara's very flexible but 100% user modifiable template based approach. For Mahara a nice balance might be achieved with SmartEvidence, a new feature that models established practice in paper based portfolios in various parts of the world.

Overall I was impressed with the support PebblePad offers clients and the community. For example they have created a deck of cards, each card shows a particular principle, pedagogy, policy or plan that needs to be implemented to ensure a successful full implementation of PeddlePad. However the cards contents could apply to the implementation of almost anything, and are fantastic. We allowed to keep them without charge, in fact as far as I know they don't charge for them at all! So don't wait, ask them for a set. 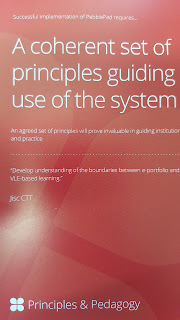 They also produce a learner journey map, showing how ePortfolios can be used by your learners. Fantastic! 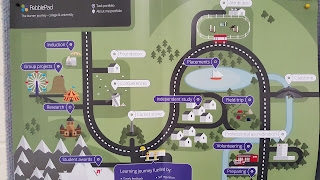 Kristina Hoeppner from Catalyst IT beamed in via video to tell us about templates in Mahara, how to create them and how they are being used by students to create highly personalized portfolios. Kristina had a few overlapping conferences and other commitments so couldn't make it in person this year.

On the second and final day a number of workshops were run. In one of these the Allison Miller raised the notion of the community working together on a project. I put forward a dormant research project proposal that I had developed for my Masters of Higher Education looking into ePortfolio practice and assessment. If supported by the home institutions it looks like this would be a great community project.

For more information such as the forum program and workshop details visit the 2015 ePortfolio Australia Forum Homepage: https://eportfoliosaustralia.wordpress.com/forums/2015-eportfolio-forum-home-page/